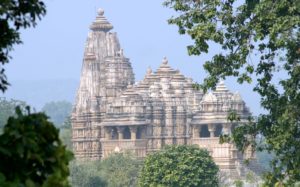 The Khajuraho Group of Monuments is a group of Buddhist, Hindu, and Jain temples in Madhya Pradesh. It is famous for their Negara style architectural symbolism and erotic sculptures. The Khajuraho temples were built between 900 and 1050 by the Chandella Rajput dynasty. Two religious Hinduism and Jainism made the Khajuraho group of temples. The temple community was reported to 85 temples in earlier days, but today only 25 temples are found. These temples are the great masterpieces of ancient of Indian arts. The 25 temples divided into three groups of east, west and south. The eastern groups most numerous all Hindu temples. The western group many Jain temples. The southern group there is only two temples, and both are Hindu temples.

The western group is the largest Kandariya Mahadeva Temple. The height of the temple is 31 meters. The wonderful stone tower in the sky is called ‘shikhara’. There are 84 smaller shikharas, analgus to the whole shape in this temple. The Indian Medicve temple architecture is divided into two styles northern and southern. The Khajuraho show the completed figures in the northern style. The plan of a Khajuraho temple comprises of a porach, a mandapa, a maha- mandapa and a Garbhagriha with the high tower. All most Khajuraho Hindu temple belongs to Lord Vishu. The Kandrya Mahadeva temple belongs to Lord Shiva. This temple was listed to Mountain Kailash Shiva in the Himalayas. In the eastern group, the Lakshmana and Vishanatha temple is dedicated to Lord Shiva. The 25 temples in Khajuraho are the works of a group the best representation of mediaeval Indian art. 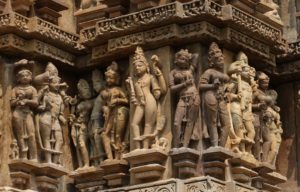 The Chausuth Yogini temple dedicated to the Goddess Kali. It was built by granite in 900. This temple consisted of 64 small shrines and each shrine had a statue of yogini, female attendant of Kali. The eastern group is containing three Jain temples and many small shrines. The largest is the Parashvantha temple is dedicated to 23rd Thirthan Karm. It was built in the middle of 10 century. This temple does not have balconies. There is wonderful art on temple walls like a girl writing a letter. They are among of the masterpieces of Chandella Dynasty art. There is no difference between Hinduism and Jainism temple in the styles. The Duladeo temple is the south group of temples, and it is dedicated to Lord Shiva and converted with splendid carvings. It was built in the 12th century. The high tide of Chandella architecture made the last building of that Dynasty. Every March villages hold the traditional dance festival and utilize the temple as the stage for the events.