RISHIKESH: The City of Yoga and Sages - 89Indians
Skip to content

Rishikesh is a beautiful place in the Indian state of Uttarakhand. It is known as Adventure City of India and also called the Yoga capital of the world. It is situated on the banks of the Ganges River. The city is famous for Ayurveda treatments and many Ayurveda centers. Rishikesh is also a good staring Laxman Jhula point for treks to Himalaya’s pilgrimage centers such as Badrinath, Kedarnath, Gangotri, and Yamunotri. This city is knowledge and peace with us numerous Temples, Ashram, and Yoga Institutes. It is a wonderful place to relax and unwind among nature. The adventure loving people there are opportunities for white water rafting on the Ganga, trekking, and Canoeing. The rafting seasons is from mid–September to April.  They also wrote around 40 songs there. Best time visit is mid –September to May.

How to reach Rishikesh? 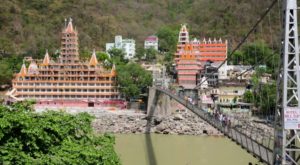 Which are the famous things in see Rishikesh? 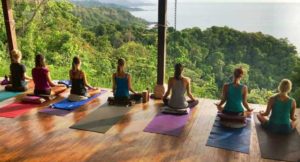 Which famous hotels in Rishikesh?

Aloka on the Ganges by leisure Hotel

Why is Rishikesh called as the city of Yoga and Sages?

Known as the Yoga Capital of the world, the Rishikesh city is also called as Abode of Sages. It attracts thousands of Rishis, Sages, and Sanseis every year. As we all know, Yoga is good for health, and it is one of the big reasons behind its popularity among the international tourists and student come here learning authentic Yoga and Mediations techniques. This city is also famous for the wide range of the Ayurveda Medicine produced. There are some of the popular institutions where one can learn Yoga and Mediations are Ashi Yogashala, Osho Gangadham, and Yoga Study Center, and Jeevmoksha Yoga School. The International Yoga Festival is organized by Parmarth Niketan Ashram in Rishikesh in India. Best opportunity to participate in over 60 hours of Yoga classes from world-class Yoga teacher practising multiple styles of Yoga including Kundalini Yoga, Power Vinyasa Yoga, and Kriya yoga.  From the US, Australia, China, and Europe Yoga students come to learn assans and kriyas.

Yoga is also helpful for mental health, sometime if it not work the we should go for online therapy, for online counselling, that will provide you technique  to overcome mental health issue.