Shah Jahan 2.0: The love saga which will leave you in tears - 89Indians
Skip to content 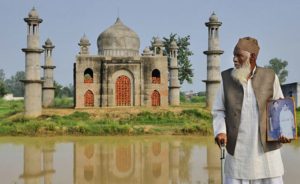 Faizul Hasan Qadri, a retired postmaster from Kaser Kalan village around 50 km from Bulandshahr district, built a replica of the world-class heritage in memory of his late ‘Begum’. His uneducated wife, Tajamulli Begum, once expressed her regret that no one will remember them after their deaths. They were a childless couple. He loved his wife very sincerely and wished to be together forever. So, he made a larger-than-life promise to build her a tomb in a way that people would speak about it of for generations. 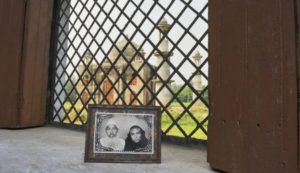 He kept that promise by building a replica of Shah Jahan’s Taj Mahal in his backyard. He, who spent all savings and the agricultural land, buried Tajamulli in his Taj Mahal after she passed away in 2011 due to her throat cancer. To build the tomb with Koranic calligraphy inscriptions and greenery around it, he had sold a piece of land and his wife’s jewelry. Stands on a 5000 square feet plot, the mini Taj took 11 Lakhs to be constructed. To complete the construction early, the former Chief Minister of UP, Mr. Akhilesh Yadav, once offered him some financial help. But, he refused to take the help because he wanted to make the Maqbara by his own capability. Shah Jahan’s Taj is eight-cornered with rooms inside whereas the Qadri’s Taj is a simple four-corner structure. Qadri also built a monument from where he can thoroughly see the Maqbara Yadgare Mohabbat. 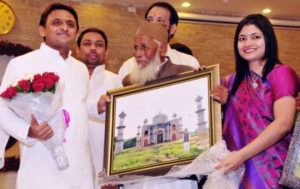 Faizul Hasan Qadri now earns Rs 10,500 as monthly pension besides the agricultural income. The senior post office clerk tied a knot with maternal uncle’s daughter in 1953. Despite his never-ending try and her never-ending willingness, the couple was not able to introduce any children of their own. And she died without having any children. He said: “The doctors initially treated my wife for an ear ailment and could not find any traces of throat cancer. Later I took her to Aligarh Medical College where the doctors told me that she was suffering from throat cancer and had no strength to bear the effects of chemotherapy. We moved into a plot of agricultural land outside the village. I got a new house constructed for her.” So, she was insecure to be remembered by their family and relatives. She lost her voice in the last days of her death, but she wanted to express her inability. Her insecurity, hence, initiated her husband to build the larger-than-life tomb – Maqbara Yadgare Mohabbat Tajammuli Begum.