The bravery of the greatest Rajput warrior

Maharana Pratap Singh Sisodiya was the eldest son of Uday Singh II (the founder of Udaipur) and the 13th ruler of Mewar. In 1540, Maharana Pratap was born in Kumbhalgarh Fort, about 85 km away from the City of Udaipur. He was 7.4 feet tall whereas the third Mughal ruler Akbar was 5.6 feet tall, Maratha ruler Shivaji was 5.5 feet tall, and history’s most successful ruler Alexander (Sikander) was just 5 feet tall. The height of Maharana Pratap was measured by the clothes and armor preserved at Udaipur palace. 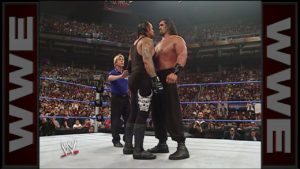 It amplifies that the Mewar ruler was taller than Indian wrestler Great Khali. However, Maharana Pratap was not the tallest fighter in history. We all have enjoyed the American epic period war film 300, where Xerxes, the fifth king of Achaemenid dynasty of Persia, was shown to be almost 9 feet tall. In actual, Xerxes the Great was almost 8 feet tall – the tallest ruler in the history of mankind.

The 7 ft 4 inch (2.26 meters) tall warrior would carry battle equipment over 200 kg (Spear: 80 kg, Armour: 72 kg, Shoes: 5 kg each, and 2 Swords: 25 kg each) whereas an Indian Army soldier now carries battle equipment upto 22 kg. He was the first Indian Emperor to fight for his native land against the foreign rulers. It was said that the Rajput Ruler (1572 to 1597) could smash metal coins by his two fingers. 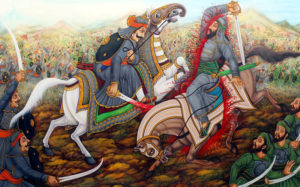 Akbar or Maharana Pratap – who was stronger?

The Battle of Haldighati is well known to all of us where Maharana Pratap fought with Akbar’s forces, led by Man Singh I of Amber. The Mughals were in the position to win the Mewaris but failed to capture Pratap, who escaped. It brings a question in our minds, Akbar or Maharana Pratap – who was stronger. Let’s have a brief discussion on the comparison of these two Indian warriors. 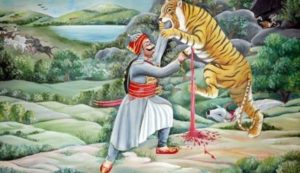 Akbar, 5.6 feet tall, was a great emperor who ruled India for more than 50 years. He was a great warrior and a remarkable reformer. The Mughal ruler, who was the wealthiest person on earth at the peak of his sovereignty, ruled over one of the largest empires of the world. Having a liberal religious attitude, he was engaged with all religions and tried to understand all.

On the other hand, Maharana Pratap is popularly known as the greatest Rajput ruler of history. He was not just a brave, fearless warrior, but also a leader of principles. Pratap stood for Hindu pride and refused to bow down to even the most powerful ruler. His pledge was not to sleep on a bed till the whole of Chittor was free of the Mughal rule. And he was able to release almost all of Mewar except for Chittor, which was close to his heart. But the Rajput ruler failed miserably in his attempts against the Mughals. Mewar bowed down to the Mughal Empire after his death.