Prithviraj and Sanyogita: A royal love saga from the 12th-century - 89Indians
Skip to content

The love saga of Chauhan ruler Prithviraj and Kannauj princess Sanyogita has not been told for centuries. The 12th-century love saga, which was memorialized by court poet Chand Bardai in his epic poem Prithviraj Raso, was not compared with the love sagas of Sohni-Maliwal and Heer-Ranjha. The romance was not highlighted anywhere except the comic book series Amar Chitra Katha and historical TV serial Dharti Ka Veer Yodha Prithviraj Chauhan. The romance was not highlighted because it was a saga in the time of war. 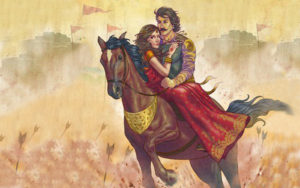 Prithviraj Chauhan or Prithviraja III was a ruler from the Chahamana (Chauhan) dynasty. His dynasty Sapadalaksha (present-day north-western India) is now extended to Delhi, Haryana, Rajasthan, Uttar Pradesh, and Madhya Pradesh. The capital of Sapadalaksha was located at Ajayameru, i.e., modern-day Ajmer. A specific group of historians presented him as a Rajput ruler even though the Rajput identity did not exist during his time. Prithviraj was, however, the last Rajput king to rule Delhi before the Muslim conquest in India. He gained a reputation for his loyalty and bravery.

The daughter of Jaichand, Sanyogita was known for her beauty and elegance. She had fallen in love with Prithviraj and desired him as her husband. It is believed that the princess fell in love with the king when Panna Ray, a painter, visited Kannauj and showed his painting of the king to her. The same painter painted a beautiful picture of Sanyogita and showed it to Prithviraj. Hence, the painter from Prithviraj’s court played a crucial role in this love saga. 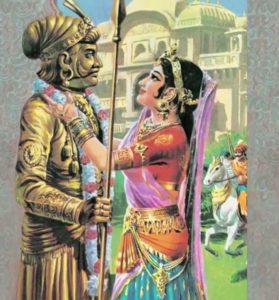 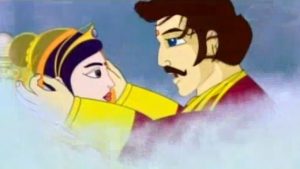 Quite interestingly, the princess ignored all the kings and princes and put the garland around the neck of Prithviraj’s statue. Prithviraj suddenly sprang from behind the statue as he was hiding behind the statue. He took Sanyogita up in his arms and carried to Delhi.