The English word Aryan which is used as a self-designation by Indo-Iranian people was borrowed from the Sanskrit word Aryan in the 18th century. Even though the meaning is not completely understood, the idea of being an Aryan was cultural, religious, and linguistic. Aryans come in northwestern India in heterogeneous groups. They would live in different part of the world including Europe, Central Asia, and North Weston India. During the 19th century and 20th century, they equated with Germanic and Nordic people. In adherence to a group of Historians, the real Aryan lived in prehistoric Iran and migrated to northern India around 1500 BC. All the warrior groups of the 21st century, including the Rajputs, are their descendants. 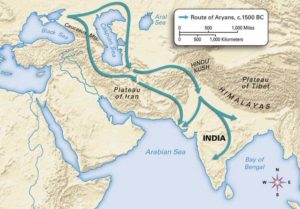 Today we will be talking about a 5,000-year-old Aryan race. The 5,000-year-old Brokpa tribe which is living in four Himalayan villages; i.e., Dah, Hanu, Darchiks, and Garkon; is believed to be the last original Aryan race. This tribe which is limited to 2,000 people is living in homes made of mud and stone in the odd landscape. They are considered as the earliest settlers in the region. 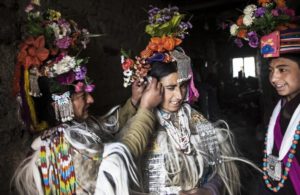 Shubham Mansingka, a Jaipur-based photographer and writer, met this tribe in 2015 and said, “Even though it was the peak of winter, I was not too worried about food and accommodation knowing the helping nature of the mountain people. Frozen roads, freezing temperatures, they only piqued my fascination of living and knowing life in the winter of an elusive and ancient tribe. The trees have lost all their leaves, and the color is a shade of crimson and fold. With fading sunlight across the emerald-colored highway, it is a sight to behold. 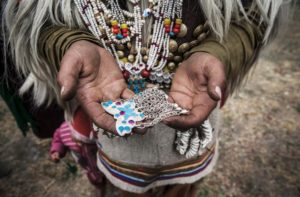 Brokpa men and women decorate their costume with hairs with flowers. Music and Dancing are two shades of their lives. Even though they are vegetarian, they don’t consume milk or milk product. They love to prepare their roti in earth ovens. Plant-based food items; such as Almond, apricot, walnut, potato, lettuce leaves, boiled cauliflower, spring onion, and wild mint; provide all the vitamins and antioxidants to the tribe which lives 15,000 feet above the sea level. Also, they love to drink black tea fortified with barley flour. Their flawless skins tell the story of their nutrient-rich food habit which is filled with fruits and vegetables. They also worship the Swastika symbol and the OM.